The Swannington No 1 Colliery (owned by William Worswick) was known as Calcutta (or ‘Cutta).  Along with the other mines in the north of Swannington and Coleorton it had closed by the 1870’s.  Despite installing pumps at several of the disused mines, they filled up with water which seeped through the coal seams that sloped down towards the Whitwick and Snibston mines.

The solution was to convert one of the mines into a pumping station.  Calcutta was chosen as it was at the lowest point.  A pumping house and headstock were built.  The site is now used by Roshal Space Consultants who are on Talbot Lane, Swannington.

In 1877 the former coal mine was converted into a pumping station with an enormous engine that could pump out 54,000 gallons of water an hour (more than a 25 metre swimming pool).  Coal had been taken from the mine along the Calcutta tramway to the bottom of the Swannington Incline, where it had been hauled up and the trucks taken to Leicester.

From 1877 coal went down the Incline and horses pulled it along the Calcutta tramway to the pumping station.  The engine was supplied by Robert Stephenson and Co of Newcastle upon Tyne.  The flywheel was the second largest in the world.  The two halves were so big that when they were lowered down the Incline the tracks under Church Lane Bridge had to be lowered so that they could fit under the bridge.

Three generations of the Hallam family, plus their Smith relations operated the pumping engines 1881-1946.

The enormous engine made by Robert Stephenson and Co

The Calcutta tramway to the bottom of the Incline, last used early 1948

Operating the Incline twice a week was expensive.  Railwaymen travelled from Coalville and it took two hours to raise sufficient steam from the coal fired boiler to operate the winding engine to lower trucks of coal and haul up the empties.

During the autumn of 1947 an electric submersible pump was installed, this made the enormous Calcutta engine redundant.  It was cut up and sold for scrap.  Huge pipes were installed.

The pumping rods engine (next paragraph) was converted to electrical power. We do not have a photograph of it at Calcutta, so provide one after its transfer to the Incline. 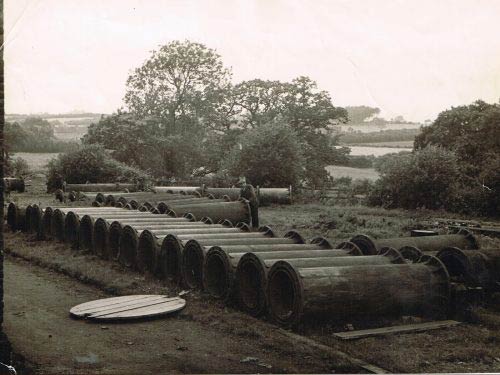 The pipes for the electric submersible pump were installed in 1847

A large crane was needed to lower the huge pipes into position.

The main engine powered pumping rods, which were oak beams, that needed to be inspected periodically, so a pumping rods inspection engine was installed.  The engine (or steam winch) was made by Easton and Tattersall of Leeds, probably in 1877 so that it could have been used to lower the pumping rods into place.

When the mines closed in 1986, the pumping station was no longer needed and the engine was donated to the Trust by the National Coal Board.  The Trust had a Manpower Services Commission scheme for unemployed people who were restoring the Swannington Incline, they measured the engine and made the concrete base where it now sits, see Swannington Incline page. 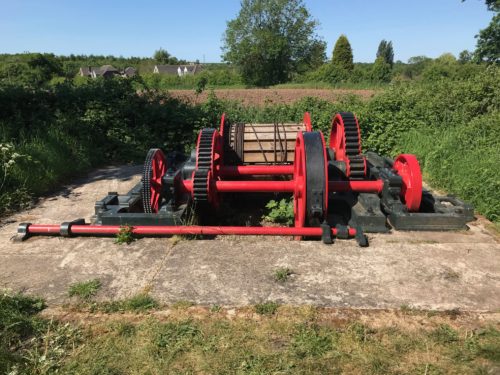