What is the difference between a tramway and a railway?

The Coleorton Railway is an interesting case.  Being horse pulled it is a tramway according to the first definition, yet by the second definition it is a railway. Regardless of the technical arguments, on this website it is treated as a tramway.

Sir George Beaumont of Coleorton Hall had the Coleorton Railway built in 1833 to take coal from the mine on his land at Smoile (Newbold) to join the Leicester and Swannington Railway at the bottom of the Swannington Incline.

Two of the photos show the route of the Coleorton Railway where it crosses Jeffcoats Lane.  Please note that The Sidings is now a private drive, whereas the route to the south is a public footpath.

The other photo is the former bridge at Aqueduct Lane, shown during the 2017 Jessop’s Tramway and the Coleorton Railway guided walk as part of the National Forest Walking Festival.  For details of the annual walk see the Diary Page.

Ever wondered why when starting from Main Street, the north side of Limby Hall Lane has a wide grass verge that disappears just before a small woodland?  The woodland used to be the Raper and Fenton coal mine.

In 1794 the engineer William Jessop built a tramway from the coal mine to the terminus of the Charnwood Forest Canal, just past the George and Dragon pub on the A512 Loughborough Road.  The tramway went along Jeffcoats Lane and one of the public footpaths is where it diverged to cross Church Hill.  After passing the former St George’s Vicarage (built later) walkers will come to the cutting.

Limby Hall Lane where tramway entered the coal mine 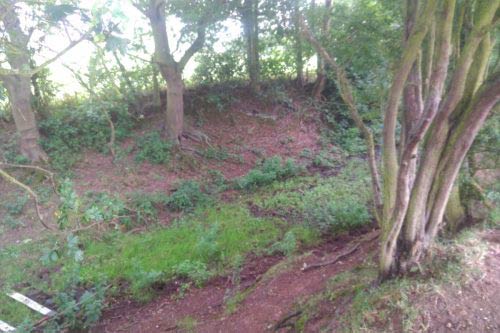