It is believed that the southern part of the pond is where the surface coal was dug out several centuries ago.  This is why a naturally occurring film of oil can be seen on the pond from time to time.  The area nearest the mill was dug out around the turn of the century. 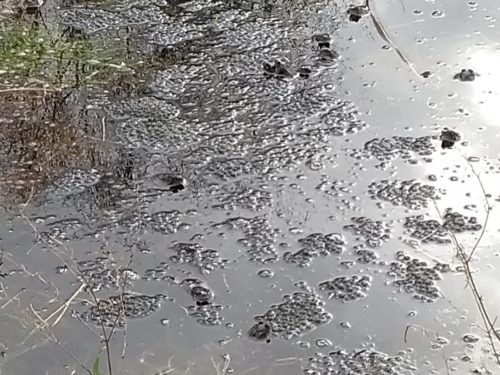 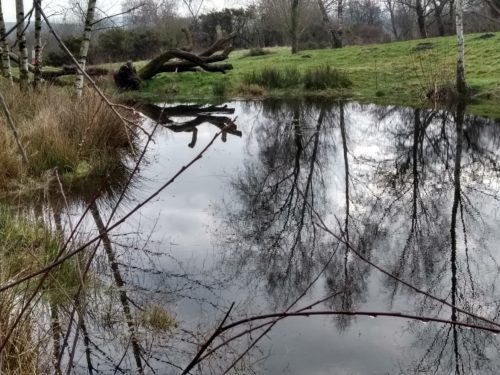 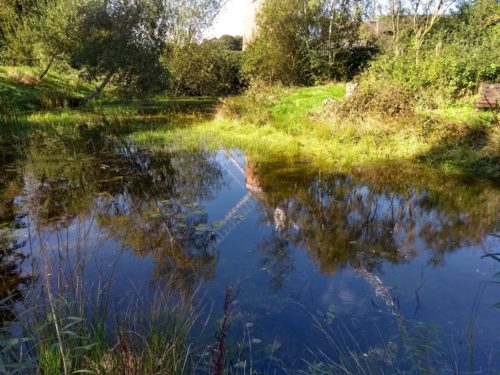 Mill reflection on the water November 2019

Trees reflecting on the water December 2019

A dusting of snow around the pond February 2020

Many of the trees in centenary wood were planted by school children to mark the centenary of the infants school and mission hall built in 1894 (the part of the school nearest the road).

In January 2016 the pond was in a sorry state.  Some of the banks were an impenetrable  jungle and light seeking trees grew horizontally over the pond.  Land Management volunteers set to work cutting back the overgrown trees and removing fallen branches from the pond.  The branches were laid in a dead hedge to the north of the pond, where they are steadily decaying and providing a great home for all manner of insects.

A brick based grass path was made along the eastern bank so that visitors are able to walk all around the pond.  By May 2016 the pond looked much better, but work continued sporadically during the summer (when grass cutting and other tasks permitted) to dig out the silt and build up the small island in the middle. 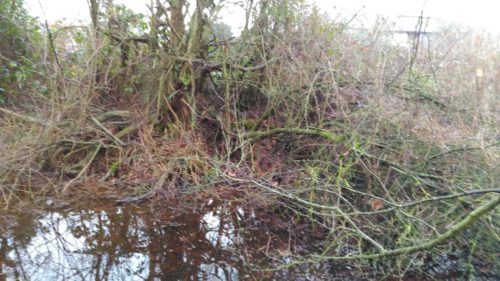 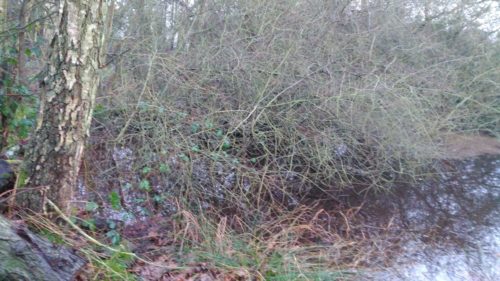 Scrub prevented visitors from walking around the pond 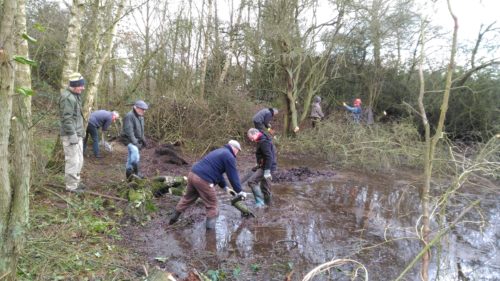 Trees overhanging the pond were cut back

The pond looked a lot better in May 2016 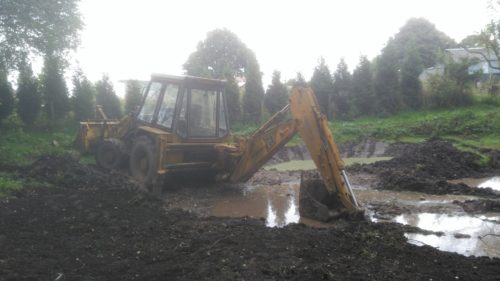 August was the best time to dig out the silt

A small island for reeds was made in the middle

Centenary Wood pond was always a seasonal pond, often completely drying up during the summer.  Removing a lot of the silt has helped the pond retain more water and there is usually some left throughout the year.

The restored pond is now in a much healthier condition.  Some plants, insects and small mammals enjoy the wetland habitat, as the parts of the pond that dry out during the summer are much damper and softer than the solid ground surrounding the pond.  Visitors are advised not to try walking across dried out areas as you could suddenly become ankle deep in mud. 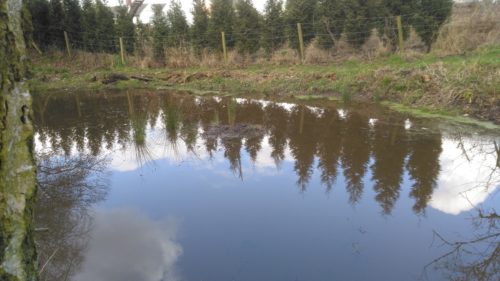 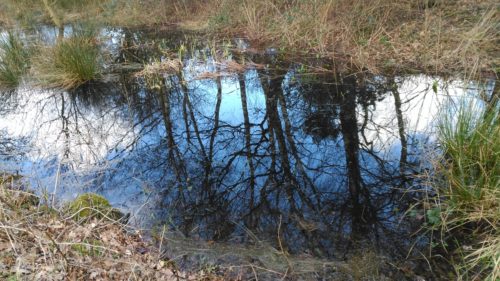 Four years after restoration the pond looks good in February 2020 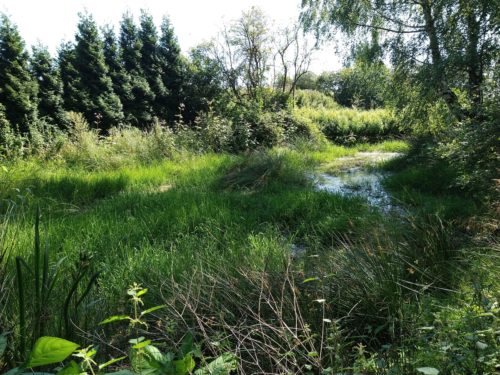 Originally a rectangular water reservoir dug out to provide water for the coal mine’s boilers.

At one time the area was so overgrown some people did not realise there was a pond there.  Volunteers restored the pond.  The summer water level is often very low. 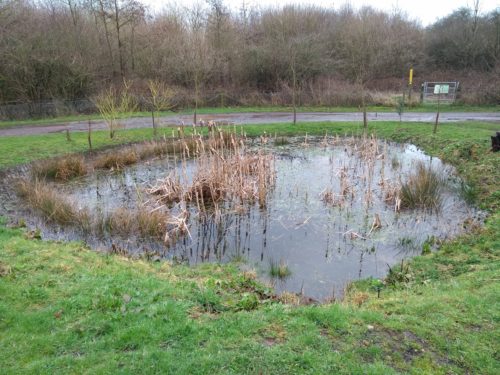 A sunny January morning in 2020 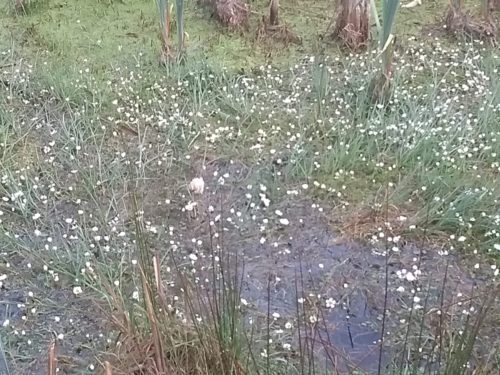 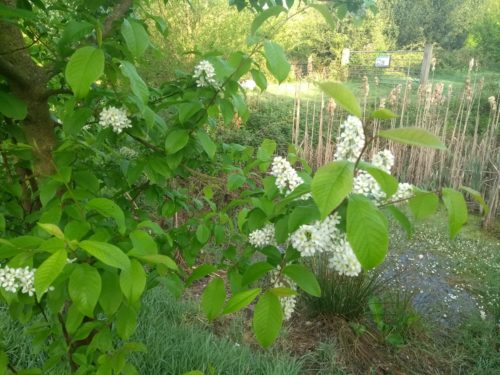 A sunny April 2020 brings shrubs into leaf and flower early 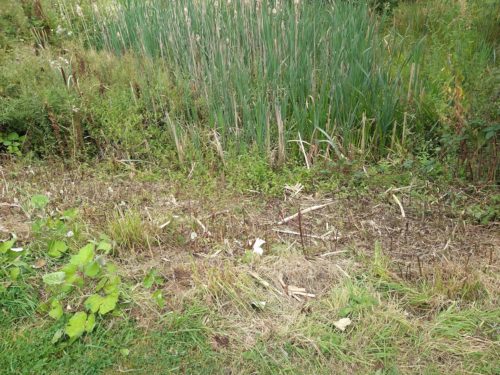 A dry summer reduces the water level in August 2020

Leicestershire and Rutland Wildlife Trust have identified the Pond Plant Species that occur in the Mill, Centenary Wood and Califat ponds. Some of the plants also occur in the seasonal ponds such as the southern part of the clay pit.