Throughout the 19th century the surname varies between Kerby and Kirby, the Kirby spelling is used on this website.

Swannington born John was a 19 year old miller when he married the widow Mary Gamble in 1807.  The marriage licence records his father, James of Coleorton, attending the grant of the licence to give his consent.

Martha Gamble poses some interesting questions as the only Martha Kerby/Kirby who was buried 1807-1813 in the Coleorton / Whitwick area lived in Thringstone and died on the 29th April 1813 aged 66 years:

We would be delighted if anyone is able to provide more information about John’s first marriage.

We know that John was a widowed miller when he married Sarah Griffin on the 26th July 1813 at St John’s Whitwick.  Census returns and marriage records record John as either a farmer or miller, it is not uncommon for men to combine the two occupations. 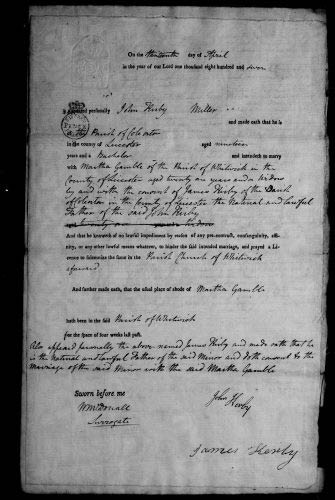 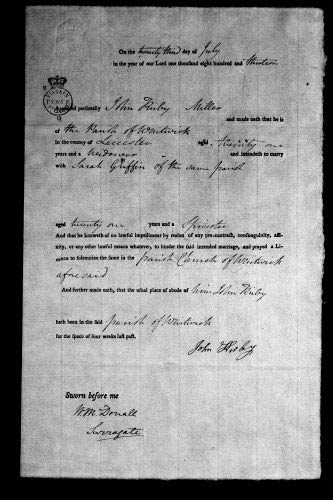 John is recorded as a miller on every census from 1841-1881.  As the eldest son, he probably took over the mill worked by his father.  The question is which mill.  The Thringstone census enumerators give very little information about where in Thringstone people lived.

John married Sarah Smith in Ticknall, just over the Derbyshire border, in 1846.  Sarah was the daughter of George Smith a shoemaker.  They were both buried at St George’s, Swannington, near the west door.  This suggests that they lived in a part of Thringstone that is now Swannington or Peggs Green, Coleorton.

John and Sarah had two children: 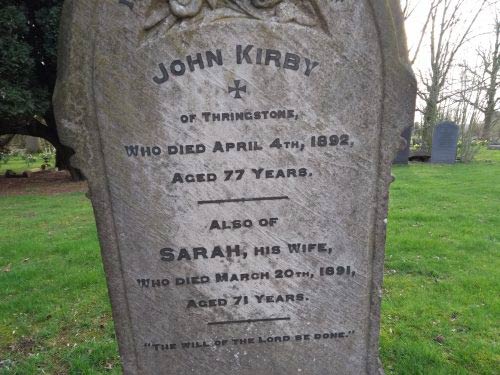 Thomas married Mahala Sketchley (see below) and worked the post mill that was to the south west of St George’s Church.  It was known as Kirby’s Mill.  The censuses record Thomas as a miller and grocer, perhaps he kept some of the flour he milled as payment and sold it in the grocer’s shop.

Thomas died in 1891 and Mahala a few weeks later.  Read the sad report of the death of Thomas Kirby The post mill was dismantled and sold, the 21st June 1895 Coalville Times advertising the auction:

Bertenshaw and Stimson have received instructions to sell by auction on Monday 25th June 1895 the whole of the material in the Windmill late belonging to and used by Mr. Thos. Kirby including pair of French Stones in good condition, pair of Derbyshire Stones, oak standard and beams, pair Pitch Pine Principals, brass fittings, quantity iron and timber, mill steps, firewood etc. 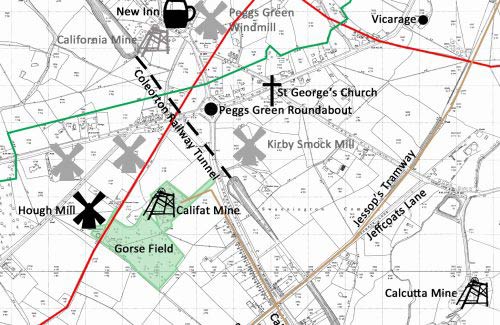 James was the youngest of the three sons of John Kirby and Sarah Griffin.  John took over the family mill in Thringstone and Thomas was working the post mill near St George’s church.  James would have thus been looking for a mill to run in his own right.

The Griffin’s needed a tenant to work the mill.  Who could be better than their relative James Kirby.  We don’t know when James started to work Hough Mill, it is possible that the mill was not used for some time.

What we do know is that when Susannah Jesson, wife of John Griffin (father) died in August 1877, the Griffins decided to sell Hough Mill and their family home.   All of their property was put up for auction at the New Inn, Thringstone (now the New Inn, Peggs Green, Coleorton) on the 13th November 1877.  The auction poster lists the mill as in the occupation of James Kirby.

The conveyance for the sale of Hough Mill is dated the 23rd August 1878 and records that after the death of Susannah Jesson, at some stage James Kirby had moved into the house from the adjoining cottage where he had resided.

Mick Bown, a descendant of James Kirby and Elizabeth King, visited the Trust’s Archive Group one Monday evening with his family bible.  It paints a fascinating picture of the family’s history.

Researchers need to be careful with such finds as they are not always completely accurate.  There are a couple of errors in the dates recorded.  Mick believes the bible could have been a copy of the original as the inks and handwriting suggest that it was all written at the same time.  This would also explain why the bible was passed down through Louisa the youngest daughter. 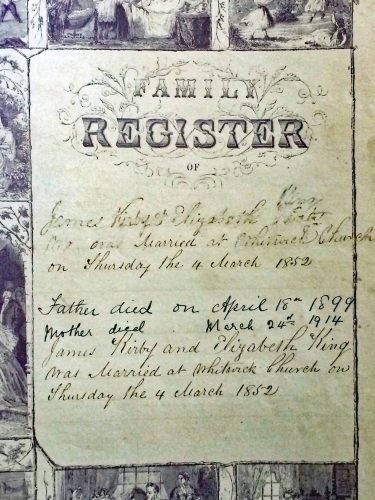 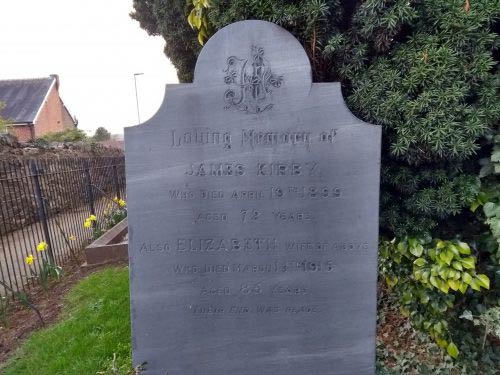 The Children Who Lived In Hough Mill

The Swannington Windmills page has a download that includes a description of how Elizabeth Kirby looked after her younger sisters in Hough Mill to keep safe from an epidemic.  Elizabeth’s memory is that she was 12-14 years old, but she was probably slightly older.  Elizabeth would have been:

Information from the Friends of Thringstone includes:

There is thus evidence to suggest that 14 or 15 year old Elizabeth and her could have been living in the mill in 1871 or 1872 (or both times) when so many children were dying.  The girls’ grandmother was Sarah Griffin, the sister of the second John Griffin who owned the mill and was living in windmill house (now Millburn).

Does this help explain the mystery of the fireplace in the mill that lacks a means for the smoke to escape?

John and Sarah Sketchley had two children, Jesse and Mahala.  The 1818 Whitwick baptism register records John’s occupation as a pot carrier.  May 1847 would have been a time of celebration for the Sketchley family as both children married:

The 1841 census records Jesse as a miller still living in the family home with his parents and Mahala.  We do not know which mill he would have worked.

Jesse was a miller in 1847 when he married Harriett Nicklinson the daughter of John Nicklinson, the publican at the Waggon and Horses, Griffydam.

As Jesse Sketchley was a miller, it is possible that this provided a link with Thomas Kirby who was also a miller.

Knowledge of Mahala’s married life is limited to the minimal information census, until the sad death of her husband in 1891.  The census was taken shortly after and Mahala’s occupation is Grocer and Miller.  Mahala is thus the only recorded female miller in Swannington.  This career was short lived as Mahala died a month after her husband.